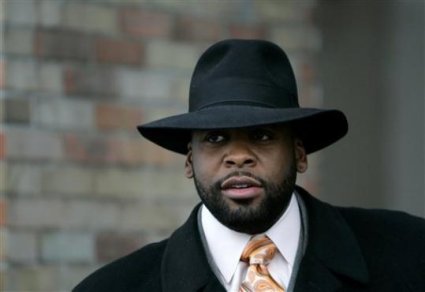 Christine Beatty was Mayor Kilpatrick’s chief of staff. She was also having an affair with him.

In 2003, they fired Deputy Police chief Gary Brown. Brown was involved in an internal affairs investigation of the mayor’s security team – “a probe that potentially could have exposed the affair.”

Brown didn’t go down easy. He fired a civil lawsuit against Kilpatrick, claiming violation of the whistleblower law. During the so-called Whistleblower trial, both Kilpatrick and Beatty denied they were doing each other.

In September, 2007, a verdict was handed down awarding the plaintiffs (Brown and his ex-bodyguard Harold Nelthrope) $6.5 million. Later, the mayor blamed the verdict on “white suburbanite jurors.” He did not appeal the verdict, however.

What wasn’t revealed about the suit was a secret agreement to keep certain text messages between the mayor and Christine Beatty private. These messages, sent on city-issued pagers, covered business dealings, but other messages were, um, much more interesting.

…many of the series of messages describe not a professional relationship but an extramarital sexual relationship between the two, often in graphic detail. The text messages further describe their use of city funds to arrange romantic getaways, their fears of being caught by the mayor’s police protection unit, and evidence the pair conspired to fire Detroit Police Chief Gary Brown.

Beatty: “And, did you miss me, sexually?”
Kilpatrick: “Hell yeah! You couldn’t tell. I want some more.”

Beatty: “I’m sorry that we are going through this mess because of a decision that we made to fire Gary Brown. I will make sure that the next decision is much more thought out. Not regretting what was done at all. But thinking about how we can do things smarter.”
Kilpatrick: “It had to happen though. I’m all the way with that!”

Obviously the messages are at odds with the pair’s trial testimony that they did not fire Deputy Police Chief Gary Brown in 2003, an ouster that led him to sue.

And now, Mayor Kilpatrick’s State of the City address: