Throwing tomatoes at one another. What couldn’t be more fun than that? This is the philosophy behind La Tomatina, a tomato festival held in the town of Buñol (province of Valencia, Spain). Every year, on the last Wednesday of August, tomato juice flows through the streets. And it has inspired a tomato battle of sorts in the USA as well, coming to states like Texas, Colorado, California, and Washington.

In Spain, La Tomatina has been going on since the 50s. The festival was declared a “Fiesta of International Tourist Interest” in the early 2000s. The funny food fight lasts 1 hour.

Here’s another with commentary by Kelly Packard:

Images and Video from the Copper Mountain tomato battle a few months ago: 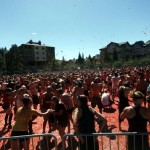 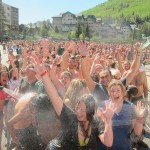 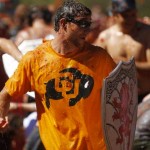