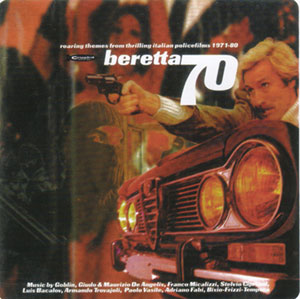 That’s not a true Beretta 70 pistol featured on the front of Crippled Dick Hot Wax’s compilation of music from 70s Italian police films (called Poliziotteschi), but you try telling that to the streetwise Italian cop ready to kick your ass from Rome to Naples. This CD, consisting of 14 vocal and instrumental tracks from various Italian musicians, makes you feel like doing some ass-kicking yourself. It’s a period masterpiece of jazz, funk, progressive rock, fusion, orchestral, and horn-filled joints that is great on a first listen and only gets better afterwards.

Featuring artists such as Goblin (who scored many Italian horror films but also Romero’s Dawn of the Dead), Guido and Maurizio De Angelis, and Franco Micalizzi, the album transports you back in time to Rome (or Naples) and right into the squad car of Franco Nero (or Maurizio Merli).

Goblin’s La Via Della Droga is a funky instrumental, while two vocal tracks by the De Angelis brothers (with vocals by Susi & Guy) called Goodbye My Friend and Driving All Around, are sad, haunting, yet beautiful themes. Blazing Magnum, by Armando Trovajoli is another funky standout, dominated by horns, wah-wah guitar, and a nice progressive backbeat. Franco Micalizzi’s Folk and Violence is a upbeat number that makes good use of Italian folk music with a brass section to complement, all to great effect.

A perfect complement to poliziotteschi movies themselves, this is a must have soundtrack compilation and is good anytime – in the car, at home, or when you’re beating down a criminal.

As a bonus, there is a 22 page booklet detailing the film history of the genre.