Here’s a guy – George Jolicur – who is in our own backyard (well, a bit north of us – Sanford, Florida) and we have to go all the way across the pond for the damn story!

The Daily Mail says that George Jolicur, who is 602 pounds, has been found guilty for scamming restaurants out of food. He would order giant meals, and then complain about them after he finished eating them, and then refuse to pay the bill. One time he pulled this trick and got 5 milkshakes out of it. 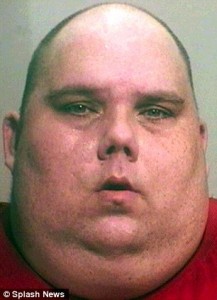 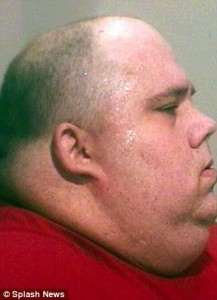 Jolicur, 38, was arrested after eating $40 worth of beef jerky before complaining that they were moldy.

When officers went to his home to arrest him, they described hearing ‘what sounded like a male trying to cover his voice as a female.’ The person told police Jolicur was not there – but policeman Jeff Sabounji then heard a woman inside the house saying: ‘George, just turn yourself in.’ On the way to prison, Jolicur, of Sanford, Florida, turned to Sabounji and said: ‘The beef jerky got me.’

Turns out that Jolicur is so big and has so many medical problems that it would be too expensive to keep him in prison. Currently he is bedridden and can’t breathe without a respirator. Instead of jail, he was slapped with a fine of over $1,000. Prosecutor Kyan Ware said: “He’s got his prison cell. He’s not getting out of that bed.”

We suppose the local media just doesn’t give a big enough crap about some giant dude scamming food from the local restaurants. But sure, they’ll run that damn Casey Anthony story until doomsday.