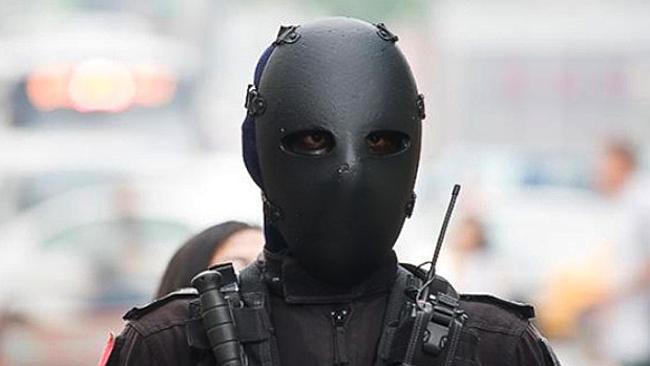 People who see the Taiwans new army uniforms for the first time, compare it to the scariest Halloween costumes they have ever seen, as it looks pretty terrifying. If you have recently watched a horror movie with a villain in it, you might imagine the Taiwanese soldiers with their new army uniforms. They feature a ballistic face mask and bulletproof armor that is supposed to defend soldiers from close range shots. Can you imagine them lined up and marching? They look just like a clone army from Star Wars. The new uniforms have now been testing and prove to increase maneuverability and decrease detectability. These tests have to demonstrate the ability of digitally generated pattern to better conceal the army, while they march through mountains or conduct their regular exercises.

The Ministry of National Defense of Taiwan has chosen special military camouflage clothing after initiating a project for uniform design, at which four uniforms were presented. The three Taiwan’s forces – Army, Navy and Air Force will wear new uniforms. The current camouflage uniform is used since 1995, so as the ministry’s budget allows the new uniforms are launch to replace the old ones. But unlike traditional camo uniforms, the new uniforms are like something from a space-age movie.

The special new design is aimed at increasing mobility and improving combat capabilities. Enemy forces will find it very difficult to detect the military forces that use these uniforms with a digitally generated pattern. The combination of nylon and cotton allows military to wear this clothing throughout the year regardless of the weather.

The uniforms are currently still in the testing phase. According to the ministry spokesman, the period of testing these new informs will continue for four months before they would be evaluated and accepted to replace the old military camouflage clothing. If they meet all the military needs when it comes to flexibility and maneuverability, the new locally made material will be put into mass production for the Taiwanese navy, air force and army, replacing the current design. This unique design is developed by the 203rd Arsenal of the Armaments Bureau in 2011.

However, this is not the only odd thing when it comes to Taiwans army uniforms. Recently, the ministry lunched the first production of uniforms for pregnant women that caters to the needs of sergeant soldiers. This step was a result of the increasing number of women legislators. So the request directed to the Taiwan military to develop and launch special military uniforms for pregnant women came from the Taiwan’s legislature. These maternity uniforms include “digital camouflage” uniforms, dark gendarmerie uniforms, as well as navy and air uniforms.

However, some people believe that it is not tolerable for pregnant women to wear informs, even tough they are specially aimed at their needs. They think that the new military uniforms for pregnant women are nothing else but waste of money, as the pregnant women cannot tolerate the heat coming from the airtight uniform, making them so uncomfortable to wear. As a result, many people believe that these new uniforms will not be used by pregnant soldiers who meet difficulties in wearing uniforms as mandatory. One of the female officers thinks this will add a lot of trouble to the future mothers.

According to the defense department officials, the Taiwan military units are not mandatory and they may apply to pregnant soldiers. Respectively, the purchase of maternity wear is not mandatory as well.

These two recent changes in Taiwans army uniforms have amazed people from all over the world, as the new army uniforms that are expected to be approved after the trials are the most terrifying thing many have ever seen, while the camouflage uniforms for pregnant women are considered by many people as something very strange, given that the period of maternity should be the most peaceful and undisturbed period in woman’s life.