People walking around Montauk these days may come across a sign of a fedora with a slash through it. The sign can be read this way: Hipsters Go Away. You see, Montauk is just a little hamlet located in East Hampton, Long Island, New York. It is considered the easternmost CDP (census-designated place) in the state of New York. Our own Bill G. remembers visiting his aunt and uncle at their beach house in Montauk; it’s a sleepy town, considered to be a beach resort and vacation spot for the summertime. Until the hipsters came. 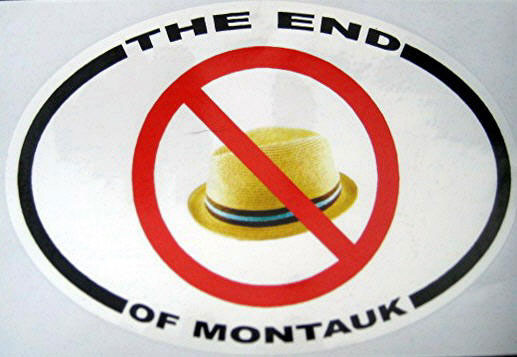 It seems that the hipsters discovered Montauk a few seasons ago, an ongoing phenomenon that has been covered by blogs like Guest of a Guest. Evidence can be seen everywhere – topless girls at Ditch Plains Beach (with their stuffed deer heads??), Lightning Bolt shorts and beach-throws, Urban Outfitters parties at the Montauk Yacht Club, paddle boarders, hipster-trash left behind… There’s a special name for them, too – Hampsters.

An article in the NY Times has suggested that to the locals, the “hipster” image is a front for privileged kids to raise local prices (like real estate) while flaunting their wealth and changing the local environment more to their liking.

Montauk has become so visible to the hipster world that it has inspired Neiman Marcus Classic Montauk styled skinny jeans, high-priced lobster rolls at the Montauk Beach House, valet parking. The fact that status-conscious individuals have now descended upon a status-hating hamlet has ruffled a few feathers, leading to an anti-hipster movement, perhaps best reprsented by the anti-fedora sign that bears the words “Save Montauk.”

Until the hipsters go away, sites like Guest of a Guest can help Montauk residents stay out of Hampster hangouts with a handy fedora-hat hampster rating scale.

Source: Guest of a Guest