If you lived in Hawaii and found out that a huge fountain of lava was gushing from the Kilauea Volcano, what would you do?

A huge fountain of lava spurting from the Kilauea Volcano in Hawaii has scientists scratching their heads in disbelief. They said they haven’t seen anything like the geyser, which began shooting from the volcano’s lava flow near the summit just after 11 p.m. Sunday, in more than a year, KITV reported. The lava wave measures about 40 feet high and erupted about six miles from the ocean

Normally, you would think to get away from such ferocious danger. But in the world of extreme sports, this is the perfect setting.

Even for the hardened adventurer, surfing in boiling waters just 20 feet from the flowing lava of an active volcano is pushing the boundaries of extreme sport. But for professional surfer CJ Kanuha the thrill of a challenge was too good to pass up. Hovering above in a helicopter, a photographer captured the moment he edged as close as possible to the molten lava of Kilauea volcano on Hawaii’s Big Island. 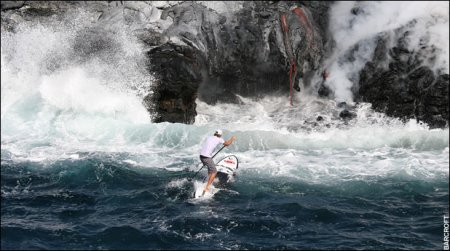 I was tentative to get too close at first, and for good reason, the boiling water there is well over 200 hundred degrees in some spots, super hot, and it quickly melted the wax on the surfboard. It was an amazing feeling to get so close to the power of the lava from the volcano.

Kanuha got away with minor burns (considering that the water he was surfing in was boiling). 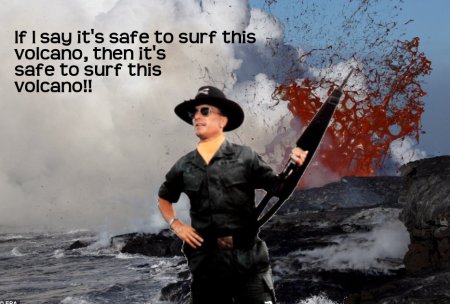