It’s here: Black Friday 2012. And as with all Black Fridays in the past, you can expect… trouble. The day is only half over and already we’ve got some Black Friday 2012 videos, which includes shopping chaos. To start up, here’s a video of crowds at Wal Mart fighting one another over phones. Although, we aren’t sure what kind of phones they are.

In San Antonio, some jerk started cutting in front of people in line. He even punched one guy in the face. But that was the wrong guy to punch – he promptly produced a gun, and everybody scattered, including the bully, who hid behind a fridge. The man with the gun had a permit, and won’t be charged. Too bad we don’t have video of that incident… we’re sure it was priceless. (source)

This one’s close to home for us (geogrpahically speaking) – a woman at a Wal Mart in Altamonte Springs, Florida maintained that she just wanted to find her sister in law. The cops didn’t believe it, thinking she was trying to bypass the long checkout lines. Chavez was charged with disorderly conduct and resisting an officer without violence. She was released at 4:20 a.m. on $550 bond. (source) Watch the video of her arrest:

Black Friday 2012 continues with this crazy scene of a Victoria’s Secret store getting bum rushed by a large crowd at the Oak Park Mall in Overland Park, Kansas. This happened at midnight. (source)

Mark Dice heckles shoppers in Oceanside, California at a Best Buy, calling them zombies. Listen to his talk about gold, silver, and the FED. Immediately we thought of Alex Jones – turns out he’s kinda of a low budget-Alex Jones.

Then, Dice goes over to Target and pulls out the bullhorn.

Here’s a news story about Black Friday 2012, which features a Sacramento man who threatens to stab people who were pushing him. People laughed, but the guy maintained that it wasn’t a joke. 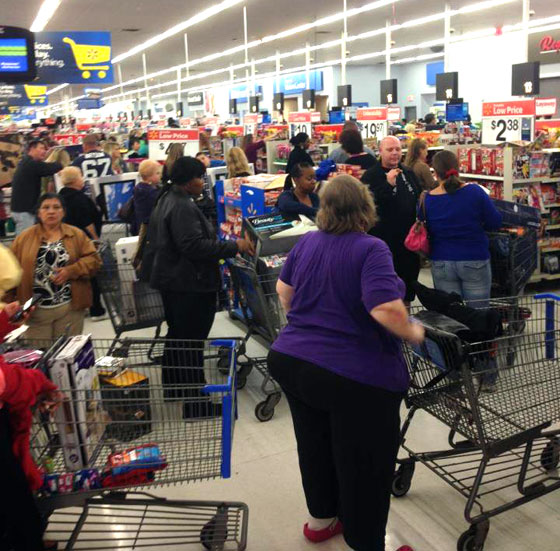 Finally, here’s a video that a couple took of a Best Buy at midnight. As he says, the lines were wrapped around the entire strip mall – maybe a few thousand people waiting to get in? Absolutely insane.