20 year old Aaron Fotheringham doesn’t let his handicap stop him. Nicknamed “Wheelz”, his video of wheelchair backflips has made him a sensation and also possibly the inventor of a new sport. 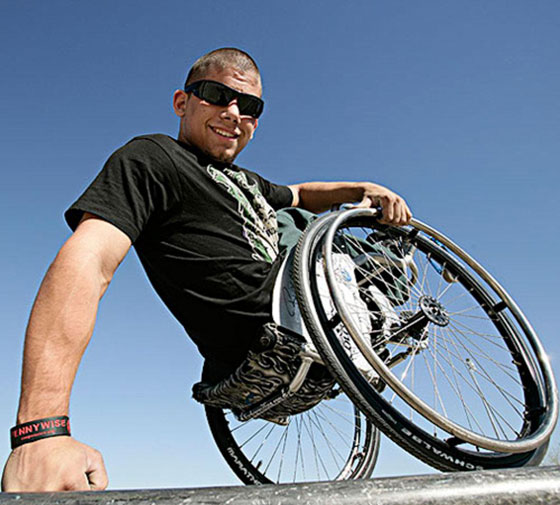 Aaron Fotheringham has a condition known as Spina Bifida, a birth defect of the spinal cord. When he was very young, he required crutches to walk but now has been in a wheelchair since 8 years old. Not content to just sit in a wheelchair, Fotheringham went to the local parks and witnessed the BMX bikers and skateboarders, which inspired him to participate.

One day his brother told him that he should try riding his chair in the park. Aaron later noted that “I did, and I was hooked.”

Fotheringham can do quite a few tricks in the wheelchair – “carving, grinding, power-sliding, hand planting, and spinning.” On July 13th, 2006, he performed his first wheelchair backflip. He soon became an internet sensation. Since then he has done double wheelchair backflips and front flips, too.

In 2010 Aaron joined the Nitro Circus Live tour, which performs in the USA, Australia, and New Zealand.

Watch this video of his double wheelchair backflip. Unbelievable!

Thanks to Ripleys! Believe it or Not for the story.