KTLA has this story about a new dangerous drinking fad popping up in college campuses. It’s called Vodka Eyeballing and it’s exactly what you think it is: an instant buzz from splashing a little bit of vodka right into your eye. That way, the alcohol gets a straight path to your central nervous system. No more “drinking” .. that’s too low-bandwidth!

Dr. Elise Brisco of the Hollywood Vision Center says doing this could mess up your optic nerve – even lead to blindness.

Kids are really creative these days. If there’s a new way to cheaply create a faster path from alcohol to your system somebody is guaranteed to find it. Keep making us proud, college students!! 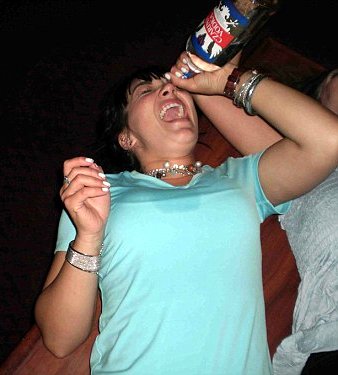 This is probably just one of those “faux trends”, as Gawker’s Brian Moylan states:

“There is a long history of trend pieces that come out of nowhere. A lot of people are trying to punk the media. It’s a sport — tricking the media into believing a story. Back before the days of YouTube kids would sit around a dorm room and try pouring vodka into their eyes and that was it. Now it’s captured on cellphone cameras and posted on YouTube. It gets in a newspaper and then it’s self-perpetuating. Kids try it because they read about it. It’s easy to get someone to say it hurts and to find an eye doctor to say it’s damaging.”