911 calls are for emergencies. Everybody knows that. However, some people have extremely odd ideas about what constitutes an “emergency.” That got us thinking about making a list of funny 911 calls. For example, there was a story about not-too-bright folks in Broward County, Florida calling 911 for just about anything – overflowing toilets, not getting their chicken mcnuggets, needing rides to places, asking what day it was, even one guy reporting a theft of his weed stash. (What’s funny is that the 9-1-1 operator in the story believes people will eventually learn. And she’s been at it for 14 years. She must really be optimistic.) Anyway, here’s our collection of top 10 funny 911 calls: 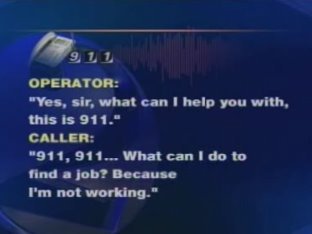 This 4 year old kid was told to call somebody when he needed help. One day he needed help with his math problems, so he called 911. Hey, makes sense to us! The operator was even kind enough to help him out!

Woman calls sheriff’s office over a burger order. She wanted a Western BBQ Burger from Burger King but apparently they aren’t giving her the correct burger. She goes into this whole spiel, trying to get the cops down there, because she “wants her Western burger done right!” The operator jokingly asks “is this a harmful cheeseburger?” Talk about funny 911 calls… hey, at least she dialed 911. Next time she might pull a Michael Douglas.

A Florida story: this guy was arrested off of I-4 and calls 911 during his arrest! We guess being roughed up by cops might constitute an emergency. Nice try, dude!

This is an absurd and funny 911 call: a cop took some confiscated marijuana and baked brownies with it for him and his wife. He then gets really high and freaks out, calling emergency. Guess he doesn’t have much experience at this sort of thing.

This one belongs in our list of funny 911 calls just for the guy’s voice alone. Obviously drunk (or stoned), the dude needs a ride to the liquor store, so he does what anyone would do – call 911. Hey, even the sheriff said she’d give him a ride! This happened in St. John’s county, Florida.