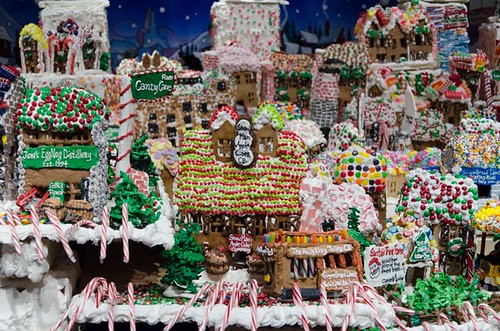 What inspire craziness at Christmas? Average, boring, regular suburban houses and Victorian town houses perched on the narrow pavements of busy streets, become transformed into miniature “Santa’s Grotto’s”. The normal bland coloured rows of identical houses sprinkle fairy lights around their windows, and, if they are feeling adventurous, place a little light up Santa in the window. The displays are usually an exciting change to the monotony of houses, but while most people keep the décor to a minimum. There are always the odd few who go to extremes with Christmas decorations.

Entire neighbourhoods become characterized by that one house with enough lights to be seen from space. One such house belongs to grandparents Jim and Carol Cooper, who have spent this past ten years transforming their semi-detached home into a winter wonderland. It was certainly not a cheap affair, costing the couple between five and ten thousand pounds to acquire all the gear necessary for the grotto. Looking very similar to Santa’s village and complete with over forty sets of lights and 15 inflatables, the couple welcomes all visitors to the small garden to view the display. There is even a Merry-go-round staffed by elves! The couple, disappointed by the lack of snow to accompany the scene, invested in a snow machine which is on around the clock to complete the look. Unfortunately, not everyone appreciates the display. The couple have had to install CCTV after vandals destroyed the inflatables in previous years. However, undeterred, the couple add to the display every year, encouraging visitors to donate money for charity for the privilege of viewing.

There is at least one house in every town similar to the Coopers’, and it seems to be for good reason. This year has seen the most complaints about both government and privately run “Santa’s Villages”. One promised Winter Wonderland in Milton Keynes in the UK, promised visitors a winter paradise taken straight from a movie set. In place of a world class ice-skating rink with reindeer and husky led sleighs, families were disappointed with greetings from Santa’s on a diet helped by very tall elves. Complaints even included too much reindeer excrement on the premises, caused by the one deer which children were not even permitted to pet. The ice-rink did not contain any ice, it was made of plastic? Thankfully, there are many houses decorated in very over-the-top Christmas decorations to compensate for the disappointing winter wonderland.

Others take a different spin on Christmas decorations. Christmas is a time for creative flair and dramatic art work, such as the Gingerbread Lane. Created by 37 year old baker New York Baker Lovitch, “Gingerbread Lane” is an entirely edible Christmas village. The village sprawls an impressive 300 feet and weighs 1.5 tons, costing a few thousand dollars and many more hours to create. Lovitch worked single-handedly, and is now the proud creator of the Guinness World Record for the largest edible product. It seems that all his hard work, which began in February, has paid off. “Gingerbread Lane” is housed in the New York Hall of Science. The weight of the masterpiece is the same as a hippo and it is as wide as a two car garage! Of course, food products do have an expiry date, and unfortunately for “Gingerbread Lane” that date is the 12th January 2014. For the lucky visitors who are around when the display is dismantled, they can grab a piece of the display to eat (hopefully a piece that was recently baked, and not a piece from last February!)