Scores of people were trampled or suffocated to death when fans trying to jam into a soccer stadium stampeded at a World Cup qualifying match. About 80 people, including children, were killed and about 180 more were hurt.

There were conflicting accounts on what set off the stampede before a scheduled match between the Guatemalan and Costa Rican national teams. Initially, firefighters attributed it to desperate fans trying to claw their way through a concrete passageway into the sold-out stadium. The world soccer association FIFA, however, said forgers apparently had sold fake tickets to the match, bringing far more people to the stadium than could fit. 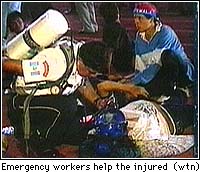 The bodies of mostly young soccer fans were lined up under coats and blankets in a long row stretching far across the stadium after the match was suspended. The deadly stampede occurred about an hour before the match. One radio report said as many as 60,000 fans may have been packed into the stadium, which has an official capacity of 45,800.

Witnesses said gate-crashers, pushing into the bleachers through a concrete causeway at the south end, overwhelmed fans below, causing a mass of people to tumble down on top of one another. The entrance to the stadium is at street level, and the playing field is dug out below. A brawl between fans in the stands, some of whom had been drinking, apparently contributed to the stampede, said Oscar Mias, a government spokesman. But Alberto Chamale, 46, who said four of his brothers and a niece died in the rush, blamed ticket-takers, who he said continued admitting fans even after bleachers were clearly filled to capacity. “The (Guatemalan soccer) federation is at fault for letting in too many people,” Chamale said.

At least 93 people were killed and 100 more were injured when fans attempted to flee from a hailstorm inside the stadium. Ice pellets rained down on the 30,000 fans watching a match between Nepalese and Bangladeshi teams. Witnesses said screaming spectators rushed to the stadium’s eight exits but found only one open. Police and hospital sources in the city confirmed more than 70 people, including two police officers, were trampled to death or suffocated. Government television reported 73 persons were killed, and witnesses said 20 other bodies were later retrieved by relatives.

Hey, people – Exits are there for a reason – so you can exit the premises. We’re sure that locking them all breaks some kind of fire rule, even in Nepal.

At the Hillsborough Stadium FA Cup (Sheffield), police opened one of the main gates which resulted in a huge number of fans entering. The sudden surge crushed many Liverpool fans against the riot fencing.

Before the game started, there was a considerable build-up of fans in the area outside the turnstile entrances. A bottleneck developed; people who had been refused entry could not leave the area because of the crush behind them but remained an obstruction. Security opened a side gate to eject someone, and 20 people rushed in through it. With an estimated 5,000 fans trying to get through the turnstiles, the police opened another set of gates, intended as an exit, but instead there was a rush through in the opposite direction. 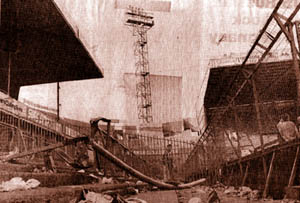 Fans were packed so tightly in the pens that many died standing up from compressive asphyxia. 95 people died and 766 were injured. The death toll reached 96 when another victim of the crush died after remaining in a coma for almost 4 years.

The disaster happened at the end of a match at the Accra Sports’ Stadium between premier league rivals Hearts of Oak and Asante Kotoko. 126 people died and scores of fans were also injured as some 70,000 spectators tried to get out of the stadium after police fired tear gas at soccer fans who were tearing up seats. Ashietey-Odunton said there were reports that all the stadium’s gates were locked at the time of the incident and there was a general feeling was that police had over reacted.

“There was smoke and there was debris, and I counted at least 15 people lying on the floor in one part of the stadium. Some were injured and some were clearly dead.”

Accra Hearts of Oak were leading 2-1 against Assante Kotoko when the tragedy began. Bitter rivalry has long marked games between the teams, and the match was heavily policed. Harry Zakour, chief executive of Hearts of Oak, criticized police for firing up to a dozen teargas canisters in the stadium. “One would have been enough to scare the public,” he said. “It’s a very sad story.” 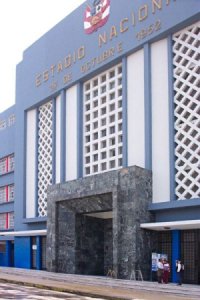 The Lima disaster is the worst soccer disaster in the history of the sport, and we are surprised that there is not more information out there on this particular event. It was a match between Peru and Argentina – an Olympic qualifying match held at the National Stadium in Lima. The rivalry between the two countries was fierce, and when Argentina came out ahead people started looking to roll some heads.

The referee disallowed a Peruvian goal two minutes from time, sparking protests from the fans. Their protests soon turned into a full-blown riot and 318 people were killed in the ensuing violence, with more than 500 major injuries.

From the book Catastrophe! The 100 Greatest Disasters of All Time

The crowd was at a fever pitch and people lit fires in the stands and broke every window in the stadium. The ridiculously outnumbered police were terrified and reacted by lobbing tear gas grenades into the stands and firing live rounds over the heads of the mob. This not only further infuriated the thousands of angry fans, it caused a mindless panic, which resulted in even more people being crushed to death or being suffocated in the massive throng of rioters.

Thousands rushed the iron doors leading out of the stadium, but, as is the custom during play, they were all locked. An eighteen-month-old girl was crushed to death when her father lost his grip on her. Others choked to death on the thick cloud of tear gas.

The doors were finally broken open and the crowd stormed onto the streets of Lima. Thousands of people then marched to the home of Peruvian president, Fernando Belaunde, demanding that the game be officially declared a draw. The deaths, injuries, terrible violence, raging fires, and the people desperately choking mattered little to an insane mob that was fixated on only one thing: the Peru soccer team must not be judged the loser in the match that had just taken place.

Remember, friends. Soccer can be a matter of life and death. Know your exits and stay away from flames.

Gimme all you money! I’ve got a soccer ball! – Bill Hicks

Read Over From Beginning