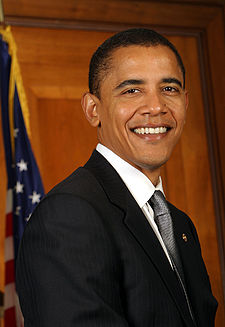 On January 20th, 2009, Barack Obama was sworn in as the 44th president of the United States.

So why did John McCain, the Republican candidate, lose the election? 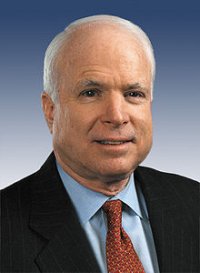 1. Maverick
McCain’s constant references to himself as a Maverick (TM) who goes against his party might have made people think there was something wrong with his party. Why vote for the same party if their candidate is constantly distancing himself from Bush? 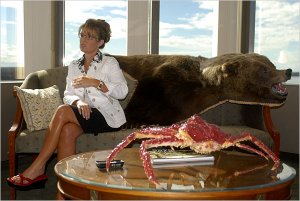 Not a good idea in retrospect. She was born as a bright star on the campaign trail only to fizzle out way too early.
The positives of a Palin pick were that she helped to energize the far right base – those who are concerned with religion and abortion – and also that she energized all those red-blooded male cowboys who saw her as a fantasy. Here’s a good looking former beauty queen who is also mother to five kids, hunts moose for sport, and has great gams. When does the calendar come out?
Negatives: women didn’t like her. We assume that part of the reason she was chosen was to pull all the disgruntled Hillary voters over to the Republican side, thinking that they would say to themselves: “Hey, she’s a woman like Hillary, it’s a no-brainer!” Unfortunately, it seems that women are smarter than that and won’t vote for a person who they have nothing in common with besides gender. Do not underestimate how huge a miscalculation this was.

3. Too liberal for a Republican
McCain’s status as maverick and his views on Wall Street and immigration clash with a lot of the base.
The first problem is that this won’t energize enough Republicans to go out and vote for him.
The second problem is: why vote for the “fake” liberal when you can vote for the real one?
It didn’t help that the McCain campaign actually tried to appropriate Obama’s “Change” marketing ploy for itself. That suggested that the McCain campaign was just a weak facsimile of Obama’s.
We also think his platform alienated fiscal conservatives, including many whom doubted he would be able to muster the votes to make the Bush tax cuts permanent, with the House and Senate leaning to the left. There was an underlying message of populism in the campaign that fiscal conservatives probably found distasteful.

4. Race
Race is a factor more than people want to admit.
First, there are racists out there – those who voted for Obama because he’s black and those who voted for McCain because Obama’s black. Ok – we don’t think they are in the majority, so this probably wasn’t a huge factor. However, the political correctness of our atmosphere may have caused McCain to pull his punches for fear of being labeled racist.
McCain’s most – if not only – “energized” base, was the racist and xenophobic base. The ones who kept screaming Obama was a terrorist, the ones who wanted to hang Obama in effigy, the ones that he had to keep attempting to silence at rallies!
Finally, it’s almost like McCain was hated for getting in the way of history. 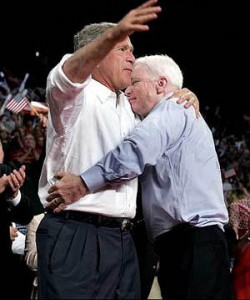 Eight years of Republican rule and this sub-prime fiasco happens and then turns into a huge credit crunch and world-wide economic downtown. The DOW, once in the 14K range, actually dipped below 8K not too long ago. This is murder for somebody unable to disassociate himself from the policies of Bush. The Rust Belt was hurting, a lot, when the “bailout” failed to immediately rush in and save American icons like the car manufacturers who employ so many people in that area.

6. The War
Maybe this one isn’t as important an issue as the economy, but we bet lots of people are sick of Iraq and didn’t like hearing McCain talking about being there for another 100 years.

7. The Experience Problem
By nominating Palin as his running mate, McCain in effect destroyed his strongest argument against Obama. Why blast Obama for having no experience and then nominate somebody in the same boat? 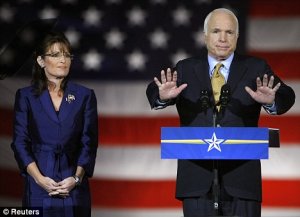 8. Money
Obama was able to raise a lot more money for his campaign. This translates to a lot more media time (witness the half hour infomercial, for example).

It seems like the Obama was the media darling; McCain, not so much. Sure, McCain had Fox News on his side. But that’s about it. And as much as AM radio tried to take Obama down (and we listened to AM radio – trust us, they did their absolute best) they were no match for the power of the Internet.
Obama also had consistent marketing and branding – iconic graphics, one-word sloganeering like “hope” and “change” which were considerably more powerful in delivering a message than the same-old-same-old signage from the R campaigns.

10. Age
McCain would have been the second oldest president in history. This may have made people think he is too old for the task. Not the least of the problems with this is the fear he would croak and an inexperienced Palin would take office.

Naturally, most of these issues are strategic. At the end of the day, Obama energized people, made them feel like something important was going down. McCain simply could not match that intensity.