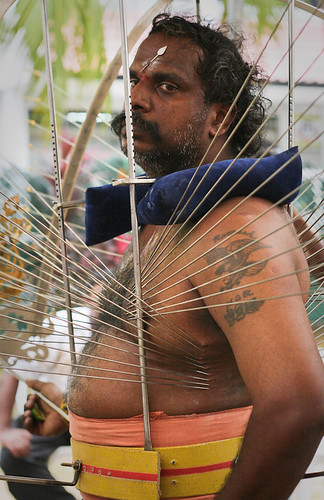 Thaipusam is another of those bizarre ritualistic festivals you hear about happening in some random part of the world. This one is truly unique in style, and has some of the oddest festival traditions. Prior to the wild events that happen at the festival is a month of fasting and prayer to cleanse the body for the rituals of Thaipusam. Some devotees also shave their heads.

The festival has its origins in Hundu folklore. This special event is a commemoration of the moment in Hindu folklore when the God of War Murugan received a spear from Parvati and this gave him a power to defeat Soorapadman, the evil demon. According to the legend, Soorapadman is invisible and cannot be defeated by an ordinary person, but only by a being that is of Lord Shiva’s manifestation. Lord Shiva is among the most significant deities in Hinduism. Lord Murugan is such manifestation, who with the help of his ‘vel’ or spear was able to defeat the demon and broke his tyranny. The festival marks the victory of the conquering of evil each year at a specific time coinciding with the prominence of a star which supposedly the guiding point for Lord Murungan’s infamous battle, and a full moon. The name of the festival consists of two words, Thai, which defines the month of the festival and Pusam, a star’s name. During the festival, the brightest star Pusam is located at the highest point.  There is another event called Vaikhasi Vishakam, which takes place on May or June, which is a celebration of Murugan’s birthday.

The Thaipusam eve is marked with transportation of Lord Murugan’s image from one of the temples to another one. During the ceremony, devotees accompany the deity and bear offerings to it. Usually they are in the form of fruits, flowers and milk, being a symbol of virtue and purity. During this Thai festival many people initiate flesh wounds to themselves. Piercing by thin spears and hooks cheeks, backs and months is a ritualized practice known as kavadis or “sacrifice at every step”. According to devotees, their faith in Lord Murugan and in his protection prevents the pain and even the blood shedding. The ceremony of kavadi presents humility and is a devotional act. The ego and self should be broken before the deity the same way as participants smash coconuts. 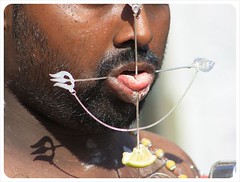 One of the main locations for Thaipusam celebration is BatuCaves in Malaysia. A silver chariot bears the idol of Lord Murugan starting from the Kuala Lumpur center and ending in the BatuCaves’ temples. The procession begins just before midnight and the journey continues for 8 hours traveling for 15 kilometres. Sometimes it takes hours to catch a quick glimpse of their deity on the chariot, as hundreds of thousands of devotees join this procession. This celebration in Batu Caves is attended by between 700,000 and 1.5 million people, who carry their offerings, while kavadi bearers carry their burdens on the shoulders up 272 steps to reach the temple.Similar celebrations of this festival take place in other cities of Malaysia as well. Some of the most popular locations are Ipoh’s KallumalaiTemple in Perak and the WaterfallTemple in Penang. The same colorful event is organized in other countries as well, so it is worth to visit any of them during the Festival of Thaipusam.All countries where significant numbers of Tamil people reside join the celebrations. Festival of Thaipusam is celebrated in the following countries: India, Malaysia, Sri Lanka, Singapore, Mauritius, Myanmar and Thailand.

With the festival of Thaipusam, people thank their Lord Murugan for this fight and for his victory over the “daily demons” that make their life unbearable causing infertility, career blocks or illnesses. In addition, believers ask for his forgiveness for all trangressions they made and pray for his mercy and blessings.