Meet the crazy Twilight fans… the people who live for Twilight

and should not be allowed near sharp objects.

First up is a girl named Anita. Anita is a crazy Twilight fan who made a video featuring her in a wedding dress next to cardboard cutouts of members of the cast. Watch the video:

In a monologue that sounds a lot like something she had to do for high school speech class, Anita says:

I’m in love with Twilight because it’s the world I live in ; it’s the air I breathe. Has anyone else called Twilight the reason for their existence, and really meant it? Well, I do…. I would literally take a bullet for any member of the cast.

A few of the things this admitted “Twihard” has done:

She mentions she has tried everything possible to meet the cast. We assume that means she hasn’t been successful. We bet the cast is glad about that. She also says she doesn’t need a tattoo on her skin to prove her love for Twilight. That’s probably because she’s not old enough to get one. However, when she does turn 18, we predict she’ll do something like Cathy Ward, a 49 year old supermarket worker (cake department).

Cathy Ward is another one of the crazy Twilight fans. She loves it so much that she got a huge Twilight tattoo on her back. It looks like this: 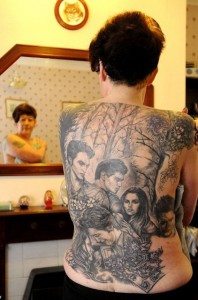 She says that Twilight

has inspired her to lose weight, wants to get her arms done before she turns 50 and wants to put the character of Edward on her stomach when she “tones up.”

The LA Times has an article about Twilight addiction, where the obsession with the books/movies has threatened marriages. Here’s a 50 year old woman:

“My husband finally came to me and said, ‘I think you love Twilight more than you love me.’ I ended up moving out of the house and fought for my marriage for six weeks. I had to take a step back and detox myself from ‘Twilight.’ I was really angry that I had allowed it to suck me in.”

We never thought it would be possible for Harry Potter/LOTR/Star Trek/Star Wars fans to look well-adjusted. But it is.