Sometimes if I hear a sample in a song I spend some time trying to track it down. One particular sample that has been used in songs by Thrill Kill Kult, Meat Beat Manifesto, other industrial and techno groups had me stumped for some time, but I just unearthed it a few days ago. The sample that took me forever to find was actually an interview with a hippie named Marcy way back in 1967. It all started with a Newsweek article called “Trouble in Hippieland/Gentle Marcy: A Shattering Tale” which then led to an interview called “A Child Again.” That interview, by Steve Young and WNEW Radio, made it to vinyl, and industrial/electronic fans should recognize the snippets spawned from it: Everybody thinks I’m high and I am, I live for drugs, Never Acid Again, I dig that.” And so on. 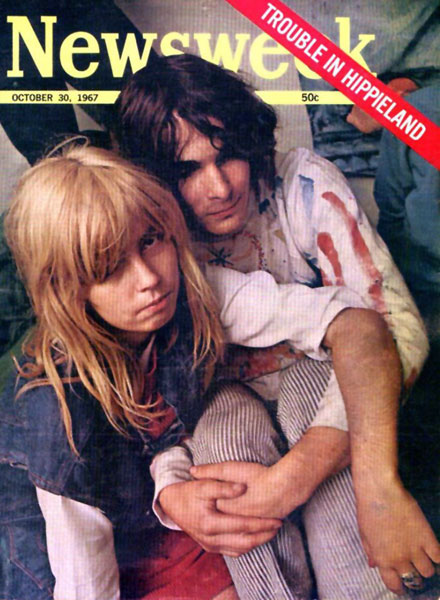 By October of 1967, the Vietnam war had escalated and the Summer of Love had just occurred. The hippie movement brought music, drugs, and sexual freedom. Editors for Newsweek decided to do a story on the rising crime and poverty in the East Village. 28 year old Bruce Porter was tasked with finding a runaway and interviewing her. The girl’s name was Marcy, a 17 year old runaway from Flint, Michigan. The interview certainly raised eyebrows – it revealed how Marcy lived with pushers, got beat up, took every kind of drug imaginable, and got an illegal abortion for $200 in somebody’s apartment. 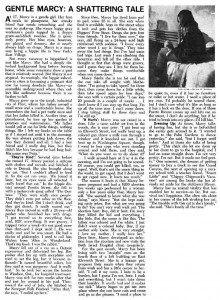 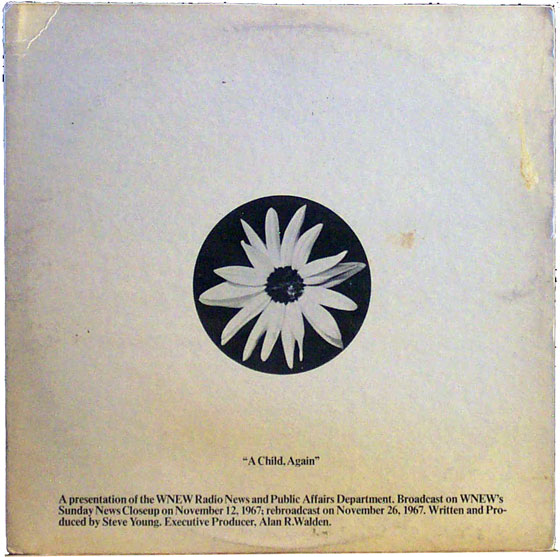 A Child Again, 1967 Interview with Marcy

The story hit a chord with Newsweek readers, who sent money in for Marcy. New York radio station WNEW then tracked Marcy down and newsman Steve Young interviewed her (and let her crash on his apartment floor). The interview was another eyeopener; listening to Marcy, you can tell she was high on drugs, a confused and emotional wreck. When I listened to the part where Young records Marcy’s phone call with her parents, I found it heartbreaking and sad. During the call, she is distraught over the Newsweek article and there’s this sense that she really wants to go home but feels like she can’t. Afterwards, Young drops Marcy and her friends off by the New Jersey turnpike. Listen to the interview here:

Here’s another embed in case the one above doesn’t work:

43 years later, in 2011, Bruce Porter wondered if Marcy was still alive and tried to track her down. With help from movie editor/documentary filmmaker Dan Loewenthal, he arrived in Flint, looking for clues. With a tip from a old biker who called himself “Moon”, they discovered Marcy’s true identity – Margaret Bachman.

It turns out that Margaret Bachman had hitched a ride with her friends to Haight-Ashbury, went to Altamont, then moved to Hawaii, got married, and had four children. She once had a fortune in the real estate and restaurant business, lost it, got divorced, then moved back home to Flint. Marcy was now living in her parents’ house again, retired. Her mom and dad had passed away in the 90s. She read Porter the riot act over his unethical journalistic behavior, and he apologized.

Needless to say, I was very happy to find out that Marcy had survived her ordeal.

A few songs sample from “A Child Again.” These include:

They should probably send Margaret some money.